Yesterday, I posted that I had finished the ADV2 Omega Repairs to Verotic Skins along with a Omega Hands and Feet Upgrade.

Today, I am pleased to say I have now completed the Update and Repair to all ADV2 Appliers.

Demon Studio - Abyss, Torya, Elyssian, Elyssian Sleek Muscle and Veyra Skins. These have all had the Omega Fix and now have hand and feet upgrades to avoid the nail overlay on certain mesh bodies.

LTX - These have been repaired and reissued. There is no hand and feet appliers upgrades for these as the skin never came with nails. Included are the Original LTX skin and the Rubber Girl Skin.

Finally in Hanabi 2.0 I have repaired the Omega systems on the Zoe, Drenai and Skunky skins.

For ADV2 Customers - Find the ADV2 Implant and Mesh body hud, and wear it - again a fresh copy will be sent to you.
Posted by Violet Studios at 16:29

Late last year I released the second Generation of ADV appliers, the ADV2 Hyper All in One applier covering ADV, Omega, Materials and various Implant Support.

Since its release, there were some niggling issues over how the HUD was working in Omega mode. On occasions, the HUD would texture just a part of an Omega body.
We verified that everything on our side was working correctly, so over a period of time we managed to help Omega track back the issue on their side and repair it.

This release is specifically to deal with this issue and when in Omega Mode, the applier will now work without fault.
I would like to apologise to my customers for this issue and sorry it took so long to work out.

In addition to this though is an upgrade.
Many mesh body makers out there have created their hands and feet without toe or finger nails, to give a cleaner look for their integrated mesh nails.
I have had customers mention to me that the texture nails on my skins were causing problems, and I went over to investigate how bad the problem was.

The new ADV2 update now comes with Omega specific hand and feet textures designed without finger or toe nails. The process is automated in the system, however for those who arnt using mesh nails, the system will preset the original body texture first before it sets the Omega hands and feet.

For ADV2 Customers - Find the ADV2 Implant and Mesh body hud, and wear it - again a fresh copy will be sent to you.

The Demon Studio ADV2 applier update is currently in the works and should be out tomorrow.

Hemi
Posted by Violet Studios at 16:06

When I first joined SL I bought the leading vendor system availabe at the time, Hippo.
Since then, with my collaborative projects such as vString, Wideloads, and Fusion I have been using Hippo to deliver products and also give redelivery to customers.

In September last year, I had several customers complain the redelivery system wasnt working. I checked it over, looked in to the reasons why things were not working, and found nothing, however these complaints persisted, and after spending time with my customers trying to isolate why this wasnt working, it turned out it was the Hippo system itself.
I sent Hippo's owners a notecard, and didnt hear anything from them. So I decided to see what was going on. Investigating, I found their main sim had gone, and the only reference to them in world was a parcel that was locked down and you couldnt get on to it anymore.
I also talked to a few business friends who also confirmed they were having problems with the redelivery system.

As a result of this ongoing issue, and lack of resolution from Hippo, I decided at the start of the year to move to Casper Vend who have it seems been putting significant investment in to their vendor system.
I am pleased to say that after a great deal of work, I have now migrated Violet Studios to Casper for those products previously on Hippo.
I have also migrated the sales lists from Hippo too, which are now integrated in to my sales records for Casper, hence there are new redelivery terminals in world which work.


Earlier this week I posted about the sims changes going on at Violet Studios.
I am pleased to say that the majority of the structural changes are now complete and all stores have been finalised.

Firstly Sveller Labs has now moved to its new home on Pheadra. This isn’t per say Violet Studios, but it is one of my projects now for over five years offering a hang out for implant fans.
Those customers who are regular should update your landmarks.
I have also taken the opportunity to do some upgrade work on that area too.
The old home for Sveller on Tuck is now decommissioned.

Secondly, the VSX store has had improvements design wise made to it and virtually everything is now migrated. Again, nothing new from the last post except the fact the original VSX store is now decommissioned. I have updated all the VSX landmarks in store, on the Market place and via the update system.

The Tuck sim will remain active until the 5th April 2016 after which point your landmarks to that sim will no longer work.

I will be doing some additional tweeking of the sims over the next week to finalise everything up.

Thanks for reading.
Posted by Violet Studios at 10:47


Since I first opened on Second Life, there has always been a space requirement for everything you do. This is why for a very long time the Violet Studios stores have had this 3 sim set up.
Back in 2010 there were a whole series of physical needs to operate my stores, however in 2016, my product lines have changed and with mesh, land impacts are far smaller than before.

As you will have noticed, I have been reorganising the Violet Studios sims since the start of the year.
There has been an organic logic to this and its now time for the final phase.

Verotic Female and Male Skins have now moved to their new home on the Deaths Head Sim.
Located next to the Demon Studio, the new stores are more compact and quite elegant. Male is on the upper level. Inside you will also find the Reanimator store too.
Please note that the original store on Pheadra is now gone so please update your landmarks.

Replacing the Verotic Stores on Pheadra is the new home of the VSX store.
This does create a new element because in order to do that, I have had to make Pheadra Adult rating. The original VSX store is still in place on Tuck, however it will be decommissioned soon.

I have updated the store lists on the right side with the new store locations.

So why am I doing this?
As I mentioned, Violet Studios has three primary sims. However in this current climate, and with my stores now using far less prims that before, I have decided to consolidate things.

On the 5th of April 2016, our Tuck Sim will be closing down.
At the moment the two primary areas for this are the VSX Store, and the Sveller Labs hangout.
VSX has already moved and over the coming days I will be rebuilding Sveller Labs on Pheadra at which point I will all but clear the Tuck sim.
This will give people near enough 3 weeks to update their landmarks and sort themselves out.

Hemi
Posted by Violet Studios at 15:44

This is another one of my "I really should do that" ideas that never made it to store until today.

Built up in detailed mesh utilising 3 piece design (left and right sides and chin mouth area) these are lovingly crafted to give a realistic and innovative design based on the Demon and Verotic Male skins.
They come with Tattoo Layers too so you can simply add these on to your existing skins.
And, if thats not everything, the beard textures and tattoo layers natural colour is white, so you can tint these to your own specifications.
This is however a first in a long time - these are not scripted. Tinting and Adjustments are to be done manually which is kind of reflected in the price.
They are just 200L$ and are available in the Verotic Male Studio and the Demon Studio. 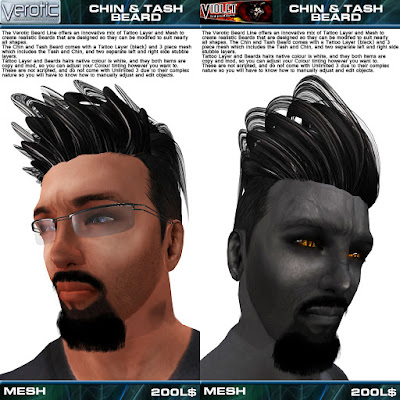 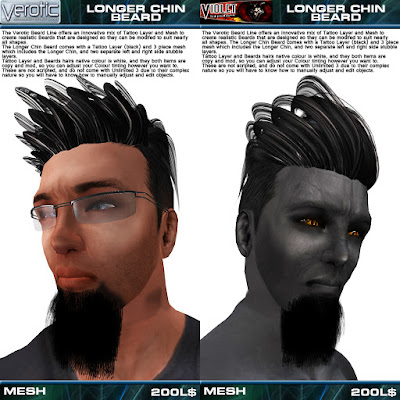 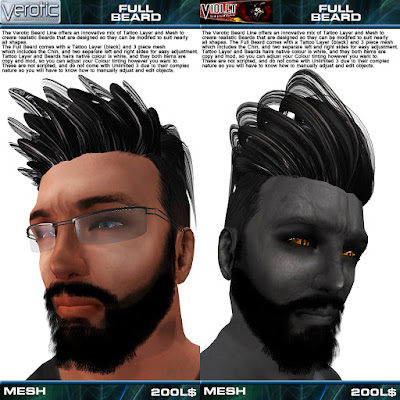 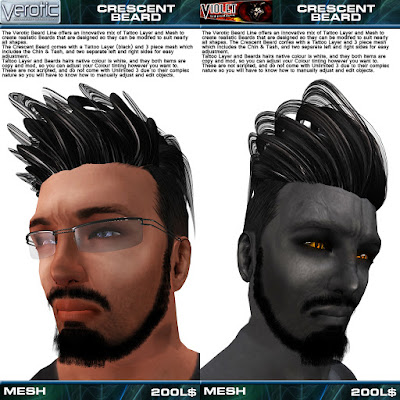 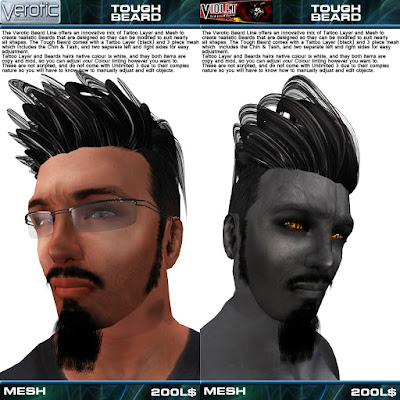 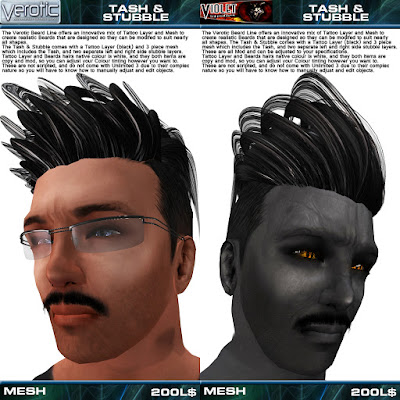 
I wear glasses. In fact its fair to say, a lot of people wear glasses and while in this wonderful virtual world we can buy just about anything, glasses seem to be in short supply.

For many years now I have had the idea of building a range of glasses in the back of my head as the small select I found many years ago of quality glasses simply didn’t suit my tastes.
I was working on something which needed me to have a specific style of glasses and I didn’t have any. So I built some, and then some more... until you get this.
Violet Studios Optica Line. 8 Unisex Glasses, a unisex Monocle and one set of female specific glasses.

They don’t shoot rockets, or have inbuilt artificial intelligence. They are just glasses.
But they also come packed with the latest design techniques.

Full Single piece mesh construction for easy fitment, 4 area Unlimited 3 Texture and colour change systems with U3 Materials shine control for the Metal and Plastic parts and fully modifiable glass opacity with a sunglasses option.
Quality design, highly configurable, and all of this at a fantastic price.

I have enjoyed building these, but with so much variation in eyewear, its up to you if you like what you see, or if you don’t see the style you want, please don’t hesitate to ask.


Now for some Eyecandy... pun intended... 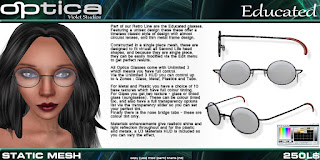 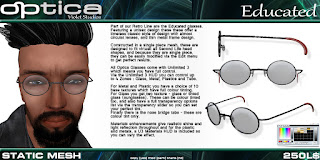 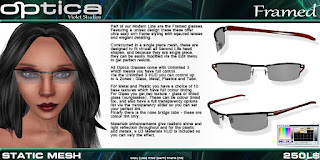 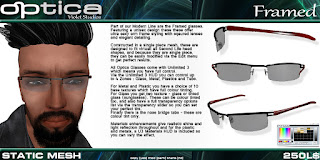 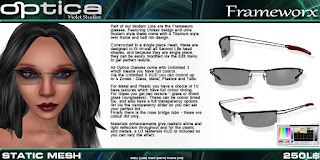 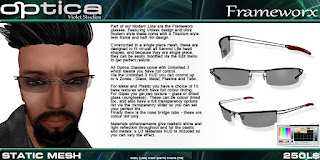 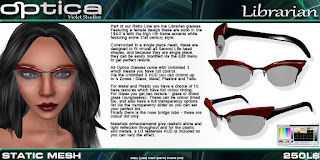 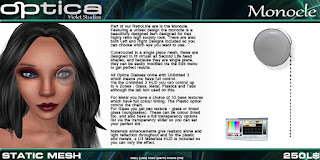 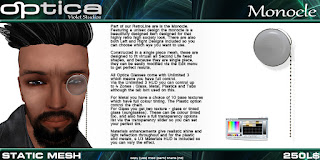 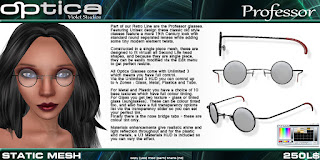 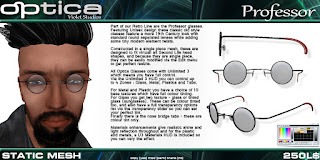 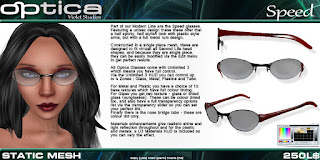 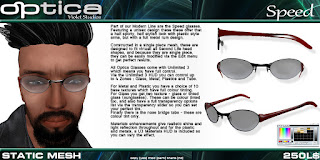 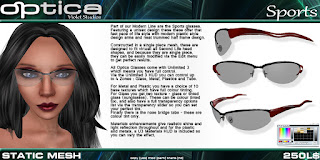 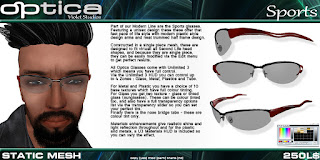 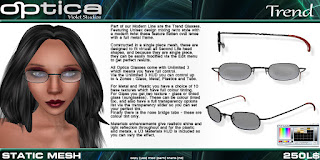 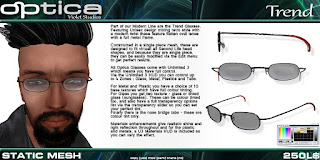