This one will probably come as a surprise. 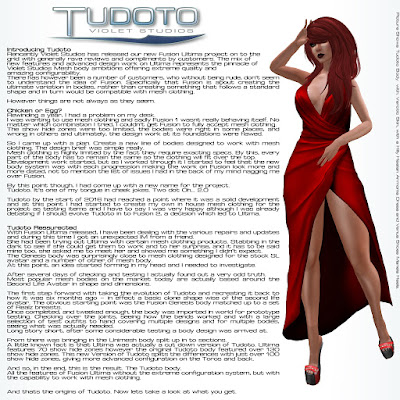 There is quite a bit of info there, but here is what you need to know.
This is a standardised body. Its not like Fusion in that you cant swap pieces out and replace them.
Its core function is to work with mesh clothing which requires one shape.

You get all of the other Fusion technical features such as Omega, ADV, Materials, Asymmetrical appliers etc.
The VSX Genitalia for Fusion will work with the body, as will the Special Legs (which have all been updated.

In some way this new body is when it comes to show hide zones superior to Fusion Ultima. There are over 100 Show hide zones with an intelligent set up system to help you get fast results (in testing setting up a generic style dress for show hide takes as little as 20 second).

But, really where this is superior in all respect is that it works very effectively with mesh clothing.
Tested over various shape files and with over 100 outfits, Tudoto worked with a good 95% of tested outfits so while its not perfect, it does an excellent job. 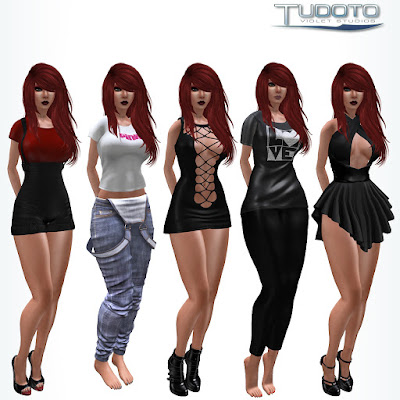 Being polite to the creators of these fantastic items Hilly Haalan gets all the credit for the clothing and Venus Shoes for the heels. I have provided landmarks in store to these creators.

As you can seen Tudoto is almost the opposite of Fusion with one body shape only, but offering amazing flexibility over mesh clothing.
Demos are in store for the body which comes in at 2000L$.
I have also written up a great deal of marketing data for this. Its worth a read.


On a side note, as I mentioned the Legs, I have at a customers request, build Amazon leg versions of the Furry Heavy legs too which are included in the update.

Enjoy!
Posted by Violet Studios at 15:35

I am pleased to announce the release of the long awaited VSX / Fusion Female Genitalia. Cant say much about it on here though...

Here is the link


Next up... something completely different.
I needed some time to be creative on something that isnt going to take months or... well, years. 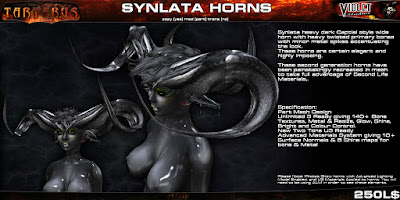 Synlata has been knocking around my inventory with several other projects now for some time, however I never got around to finishing them.
These are dark captial horns, they are quite basic and at the same time, very elegant.

I have over the last week been inundated with messages from very happy customers over the release of Fusion Ultima, and the very positive impact the new body has had.
Needless to say it has all been very well recieved.

You know there is a but coming...

I think I forgot the old mantra of you cant please everyone though.
I have had a few customers wanting to go back to the older classic style of Fusion. Personally I dont fully understand why, but I am not one to stand in the way of this requirement.

For those customers who for what ever reason preferred the older version of Fusion, I have now reinstated the old body as an extra box in each pack.
This covers everything - Bodies, Pick n Mix, Implants, Wideloads and special legs.
If you want to get the older parts, all you need to do is wear the updater and it will be sent to you.

One thing I am going to be very clear on though.
I will not be updating Fusion 1 - Ultima is now current body. I am providing these parts as a courtesy to existing customers who wish to continue to use Fusion 1, however all future development work will be done on Fusion Ultima.

Nearly the Final piece of the Ultima Puzzle - all of the Style Heels have now been updated to Fusion Ultima specifications.

If you wear your updater included with the style heels you will find the 4.5 Ultima versions in the box sent to you.

Hemi
Posted by Violet Studios at 16:38

As promised a few days back the process of upgrading all Fusion bodies to Ultima Specifications is an ongoing job however with the introduction of the Fusion Ultima Balloon Doll body, we are now all but done on the migration to the new generation of products.

As with the other bodies, this is a free update for customers.
All you need to do is wear the updater to get the latest Ultima version.

I will be working on getting the Style heels updated next at which point the Ultima project will be completed.

I think its fair to say with a project of this size there will be minor bugs creeping in here and there and to my surprise, so far there have only been a few.

I have just issued a re-release to the Ultima Bodies and universal basics pack.
This update affects the following Full bodies.
Genesis, Model, Athletic, Amazon, Ruben, Andro, All Woman, Skinny, Preg or Preg Skinny, and or the Universal Basics pack.

What were the errors?
There was a minor glitch in the Hands coding that was causing them not to function correctly on the left side nails and the left side tattoo layer.
In addition, our Omega Nail applier system had a tiny bug in how it was working which meant it wouldnt apply textures.

The Hands really are a must have update.
Optional if you want to use Omega Nail appliers, are the Daily HUD and Feet (all models).

Shouldnt make life too painful and apologies for these errors.
Simply wear your updater to get the fresh copy.

Now on a sub note, I have had people asking me about the differences between Fusion and Ultima, specifically about the shape.

For example, I have had one customer asking me why the Fusion Pregnancy skinny body seems to be bigger than the old one, and another saying that the Revolution Heliums are far smaller on the new bodies.

I would just like to say, I have no clue why these observations are happening. In tests of both of these items, wearing both the original Fusion 1.5 model and the Ultima, yes there are minor differences, but no, they arnt smaller, or different in any extreme ways.

Ultima is however a different body, laid out differently with an all new Topology and all new weight painting not to mention a whole new out of world production methology.
There are going to be differences due to these changes however, in my production environment, the working method I used was simple.
The original Fusion parts were imported in to the new Ultima base files, and then Ultima was adjusted and sculpted to be as close as possible to those original items.
In fact the only real difference here is this - Ultima is far cleaner and more realistic than the originals with additional detailing put on.

I hope this clears it up and as for them being radically different, I would suggest its more of an optical illusion. 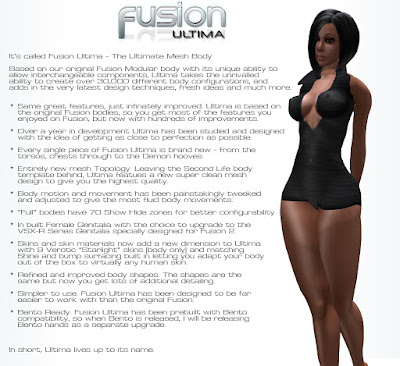 That sums it all up really.

A little information for you though.

Firstly, Balloon Doll is not updated yet - it is finished but requires some additional scripting work to complete. It shouldnt take too long though.
I am going to be working on two elements over the new week. Namely the VSXR Ultima functional Anatomy and updates to the Style Heels to make them full compatible with Ultima.

Outside of that though, Ultima is now in store.
If you already own Fusion or Pick n Mix elements, or the Revolutions / Wideloads, wear your updater. Ultima parts are now fully deployed. 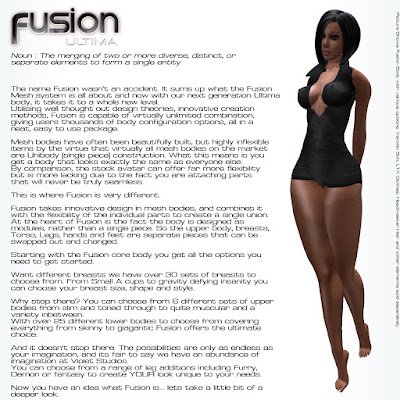 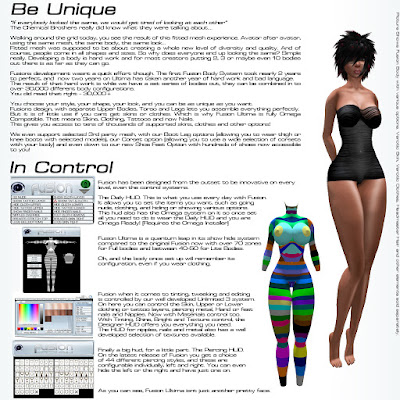 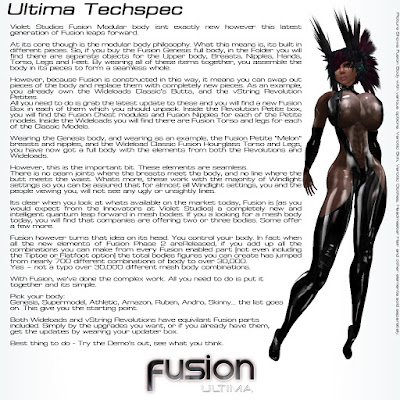 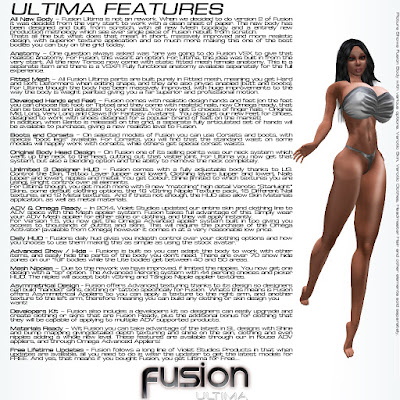 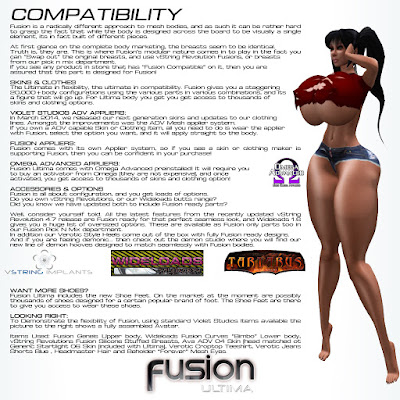 I would like to apologise to my customers for this, but we hit a whole raft of snags and technical issues shortly after I put out that posting about Fusion 2 coming.

A few things have changed over the last month with the Fusion 2 project, including its new name.
Fusion Ultima.

I cant give an exact date and time for the release of Fusion Ultima, however I am aiming for this weekend (next few days) if I can get all the marketing work and finalisations done.

Here is the blurb. 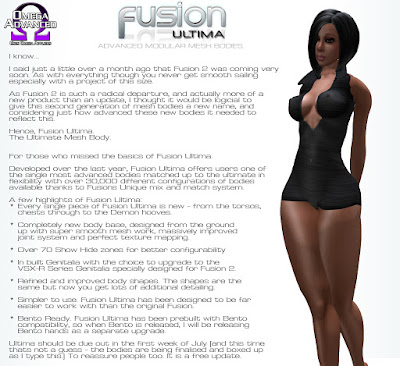 Expect more on this very soon.
Posted by Violet Studios at 09:30