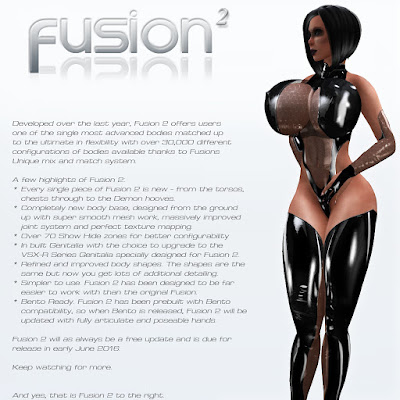 As many of you will have noticed I have been very quiet for a few months now.
The reason for this should be obvious from the above, but I thought I would give you some background before launch.

Roughly a year back, I had a number of people asking questions about Fusion which led to me re-evaluating the entire product. It was things like in built genitalia and some niggles over the way some of the textures were seating. I had been aware of these for some time and they had been bothering me.
The problem was, to repair and make additions like this would have meant a massive rebuild of the original bodies and if you are going to go to such lengths to make repairs like this, why not go the extra mile?

In 2013 I started looking in detail at mesh bodies, and while I was competent with mesh, I was still on a very steep learning curve.
Fusion by its very nature is a highly complex product, and I am pleased at how it came out in the end, however the problem is Fusion is based on a series of rules that you cant simply come back and fix. To alter these rules, requires virtually every option to be rebuilt.
When I first started working with mesh bodies, I made several mistakes.
My First mistake was using the original Second Life body as a starting point. At the time it seemed like common sense really, but having worked with mesh now for an extended period, I now know that the SL body is ... well, rubbish. Its Topology is awful.
Then my Second mistake. I imported the bodies directly from Second Life, and this was a huge mistake, because when they came in, they were built in Tri’s, not Quads. I wont go in to why this is such an issue, but needless to say, it is the reason behind the Jagged texture errors that plagued me with the original Fusion.
Outside of this, there were niggles with the weight painting, how the body moved, issues with how I originally assembled Fusion and. Well, the list goes on. I know, I made one.

Fast forward to 2015, and I had been playing with the idea of doing a new mesh body to replace Fusion. The projects name was Tudoto (2.0 – get it?).
With this project, I took everything I had learnt about mesh and put everything in to one place.
The core Foundation for the body is not based on the Second Life body. Its all new, extremely well laid out and highly detailed, with clean Quad topology which cuts out any texture mapping issues.
This design has been finessed over the last year so that it is technically perfect.
On top of that, I have reworked all the Weight painted with new hybridised weighting system (using mostly Fitted, but in some areas rigged to get around issues). The body is now beautifully balanced during movement.
To polish off the body, you get more advanced breasts with seamless designs and realistic styling, and more importantly, she comes with fitted mesh genitalia. If you wanted a more functional version, there will be a VSX-R series naughty bits available separately.
Oh, and when (or if...) Project Bento arrives, the hands are already preset up for Bento so you will have fully functional hands which will bend, grasp etc. Sadly until it does arrive F2 will come with regular static style hands.

So... the big question.
When’s it going to be arriving?
I am hoping to get F2 in store within the next 2 weeks, assuming no spanners drop on my head. The bulk of the mesh works done now. I will probably finish the mesh work by next week while the body is over for scripting.
And of course. The big point.
Yeah, I am insane. This is a like for like, free update for Fusion customers.