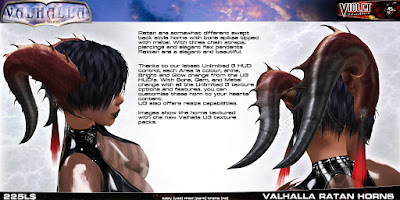 Beautiful and and quite different, Ratan are a swept back style side horn which wraps around the ears.
Featuring bone spikes with metal tips, 3 levels of chains on the side and elegant side flex pendants, these horns are sure to be a lovely addition to any demoness.


I am pleased to present the Fusion Ultima Datass Torso.

Sadly this is a PG side, so to view the pictures and full info, you will need to go here

It is 500L$ and is available in the Fusion Pick n Mix department now.
Posted by Violet Studios at 21:58 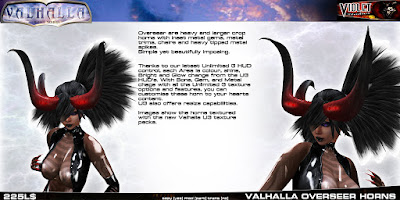 I have to admit I am now getting to the end of the Valhalla horn release, but I have save some of the best ones for last.
The Overseer horns are just beautful in my books. Strong, firm and imposing, but simple and elegant too, these are one of my favourites so far from the Valhalla line.

Hemi
Posted by Violet Studios at 14:51


Over the last few weeks I have had a lot of customers asking me if I will be doing bento items. For those of you who don’t know what bento is, or you read the announcement about it in December 2015 and forgot, Bento is a new skeleton of sorts offering a whole new series of bones to play with including face, tail, wings, hands and more. This obviously means creators like myself can now do far more with mesh work.
Since Bento was announced, I have had a long list of items planned. Fusion Ultima will be getting Bento ready hands, the Headworx project from back in 2014 is being brought back and will use Bento, and the demon studio will have Bento Tails and Wings. I may even do some more exotic items too.
The problem surrounding Bento is that until a few weeks ago, Bento was unfinished. I have been very cagey about this as Bento is complex, and the last thing I wanted to do was create a whole series of items pre launch, only to find LL's changed the skeleton or specs. As a result, while I have many items that are ready to go to bento, I have never actually done anything with them or really explored it in detail, waiting for it to arrive.
I had also assumed from past experience over fitted mesh that the 3rd party viewers would take weeks if not months to integrate the Bento source code in to the viewer. This would afford me time to get down to creating Bento items, however much to my surprise they seem to have done the job in a matter of days.
Anyhow, I will be playing catch up over Christmas and I will have items ready for release in January 2017.

Soapbox time.
I will not rant too much about this, but I am quite staggered by the fact Bento actually took a year. When it was announced in December 2015, I got really excited by this prospect. Provisionally I estimated that at the earliest, Bento would arrive in late Feb, latest May. In March I got the skeleton for Bento and did some provisional testing with it. By May, I was sat there scratching my head wondering what on earth they were playing at as they seemed to be still developing it. By the time August came around, I had lost all enthusiasm for Bento and given up on it ever arriving. When it finally arrived much to everyones surprise this month, I had all but forgotten about Bento. What is perhaps the biggest annoyance though is running through the Bento rigging and specs, I find that the Bento skeletons from March this year I got, are what has been released.
So what on earth have Linden Lab being doing? When they announced this last year I thought they had given creators an early Christmas present. Turns out I was right, but it was the wrong Christmas.

This next one, I am biting my tongue over. Sansar news.
Some years back I tried to calm the rumours down over Second Life 2 as it was dubbed by fear mongering users. Over the last year more details of Sansar as it is actually know have been learnt and I all can say is, what I said all that time back was accurate.
Sansar is not Second Life 2, it will not replace Second Life and it was never designed to do that.
Why? Here is some info. Sansar is not a grid as far as I can see. It is software designed to make grids, small ones it seems which is going to be licenced by LL's to outside companies. The reason for this is as follows. At the time of writing there is no market place for Sansar planned, there is no universal asset system each grid having its own inventory than cannot be transferred, there is no universal currency (no L$) as each mini grid is required to organise their own systems most likely paypal. In addition although subject to new info coming in, there seems to be no virtual world planned on the scale of Second Life by LL's outside of perhaps a sales demonstration grid for the software.
Perhaps more important is some of the technical details. The one that hits me hard is the viewer has no editing or building tools built in. This is one of the biggest selling points of Second Life. Sim owners or creators are required to use a special editing viewer. You can't rez things out on a sim. If you make changes, the whole sim has to be reuploaded from the editing viewer. That matched to the professional designer level technical knowledge means Sansar is not a product of the people. Its a product of the few with the right skills and it very inflexible.
From everything I have read over the last year about Sansar, it has all confirmed what I originally said. For me, I will be dropping this, unless something else comes out of the woodwork which is doubtful. Last word.
Sansar is not Second Life 2, it is not going to replace Second Life and Second Life will not be closing, merging or being absorbed. Your inventories, investments etc are safe based on what I have read over the details of Sansar.
Hemi
Posted by Violet Studios at 09:55 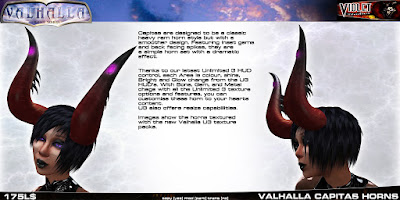 Simple but imposing, capitas are heavy ram style horns. With minimal detailing, they have back facing rippers and inset gems near their tip.
As always these are fully U3 compatible with over 150 textures to choose from and comes with all other benefits. Tinting, shine, materials etc.
Priced at 175L$, they are excellent value.

Enjoy!
Posted by Violet Studios at 15:45 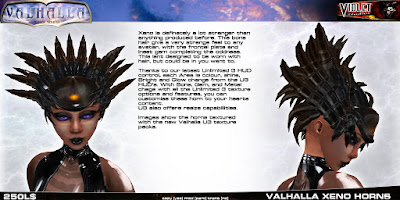 Normally, when I release a set of horns, they are usually designed to be something in addition, however the Xeno Horms are really something unique. This horn crown and almost hair has a very alien feel to it. The more eagle eyed will recognise these from earlier in the year in Busted Magazine however these have been reworked somewhat for a more demonic feel.

They are 250L$ and are in store now coming with all the usual U3 extras and materials packs. 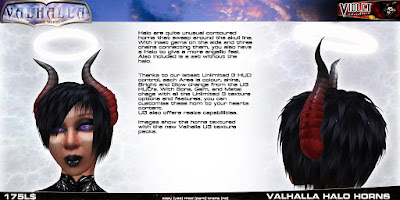 Something a little different here. These smaller, elegant horns are designed as head huggers. Beautifully detailed in mesh, they have inset gems, and come in two version. With or without a ghostly halo. 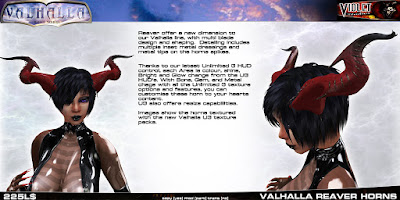 Continuing with the Valhalla horns release, comes Reaver.
These are very special and quite unique horns with their single length multi blade design.
Featuring metal detailing these are very aggressive, while beautifully elegant.

Priced at 225L$, they are in store now along with all the new Valhalla horn releases 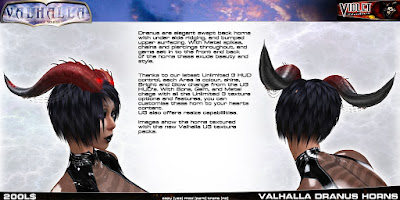 Following on from yesterdays release is the new Dranus Horns.
These simple swept back style hrns ovvers metal tips, chains and gems inset.

Beatuiful and elegant, these are a little more than they first appear with beautiful mesh detailing. 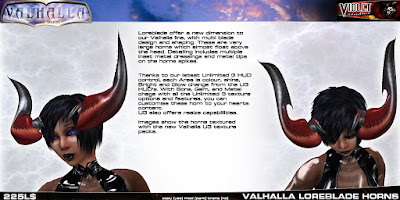 Always love Winter, and the associated Flu that comes with... All I can say is even if I am not fully better yet, I am back at work picking up where I left off.

A month back I started the slow release of the new Valhalla series of horns. Continuing with that theme, I am pleased to release the Loreblade horns.

These are quite different to anything I have produced before, featuring single multi spike blade style horns. With accented metal trims throughout and a design that sits off the head, Loreblade is one of my finest designs to date.

They are in the Demon Studio now, priced at 225L$

I would also like to say, things are getting back to normal now, so expect quite a few more releases over the next few weeks!

Enjoy
Posted by Violet Studios at 15:04