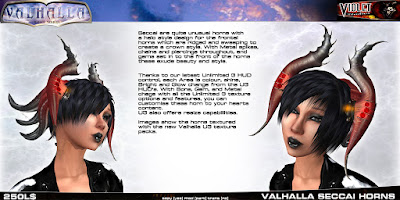 Seccai are a beutiful halo framed horn set quite different to the usual offers from Violet Studios. With inset gems, piercing and spikes, these horns exude elegance and style.
As always you get full unlimited 3 integration throughout with hundreds of textures and materials options open to customers.

I can't show them here but you can see them on the Adult Blog!
Posted by Violet Studios at 16:11 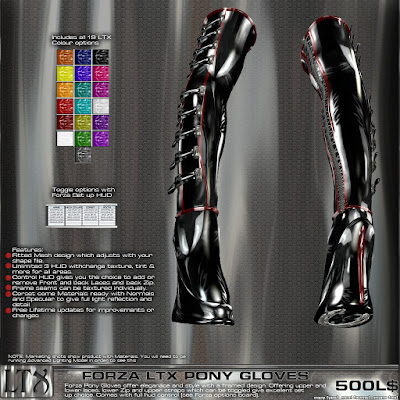 This has been on the cards for a while and I kept forgetting to do them, but finally I have released them. One of my customers asked for the Forza arms to be refitted with Pony gloves and this is the result.

You get the same basic design as the Forza Gloves, but with the hands changed over to pony hooves.

It is 500L$ in store now and you get loads of options - just see the image above.

I have just released the Fusion Realz pack 6 - the so called Realz Implants.
I could go over it all again, but the fact is all the details can be found on the adult blog as they are not PG photoshoots.

I have released two new products in the Fusion store today

First is the Beyond lower body. This is effectively the largest lower body I do now making the Titans look small.

Secondly at the other end of the scale is Cute. Cute at first glance doesnt seem to be anything special, except its specially designed for regular sized avatars. By that I mean 5.5 feet tall rather than 7...

Full details are on the adult blog for both products including pictures.

The Beyond Lower body and the Cute Lower body or complete ready to wear body are in store now.
Posted by Violet Studios at 20:21

Hippo's Demise - The Fall Out


As customers you may well have heard that one of Second Life's biggest vendor systems, Hippo went under a few weeks back. Summing this all up, the servers they used to send goods around the grid effectively burnt out. They then said they were quitting the grid.
This decision on their parts has left thousands of merchants and customers high and dry when it comes to sales but worse redeliveries.

I saw this coming back in 2016 when there were technical issues with Hippo, and I made the decision to move away from the Vending system to Casper. As such the Hippo database of sales was migrated to Casper and I thought that was the end of it. I did however continue to use Hippo Update as for some reason I didn't realise that this was actually also linked to their servers.

What this means for customers is that any updater supplied with a Violet Studio Product is now borked. With the loss of Hippos servers, the system will no longer work.
Yeah, it left me in a pretty foul mood.

I have been working towards getting Casper Update operational since I found out about this and the first piece of this are starting to slot in to place. I have also with my team investigated if there was any way to get around the updater, but sadly the same systems put in place to stop people illegally breaking in to them also stop any form of remedial work. This leaves me with some problems, although it's not a complete disaster.

Any Product bought through the Casper System is logged to your personal account name. This means that if you bought an item in world, then you will be able to go in to my stores to the redelivery terminal. From there, you can go on to their service and redeliver the items.
This does leave the problem of the Market Place though, but thankfully Casper has a solution there too.
I have downloaded sales from 2011 to present and linked Casper up to the Marketplace so now if you bought an item on there, you can again come in store, go to the redelivery terminal and download an update.

So, there is hope... But I really need to look at where the updateable products are.

Fusion - All Fusion products come with an updater included. As Fusion is sold through Casper and the Market Place it means that you can go in world and simply grab an update from the redelivery terminals. The only exclusion to this is if you were given an item directly from me (gifts etc). In those cases contact me in world.

vString Implants - These are very much the same as Fusion. Head to the Redelivery terminal in world and gain drop me a line if that doesn’t work.

Demon Wings - I have to be honest here. I know these are now old school and they were all due to be pulled from sale this year and replaced. There has been no significant update to these since 2014 and I have Bento flavoured wings in development. As such, regardless these are now officially discontinued and there will be no more updates. If you still have a set of Version 3's that you desperately need updating let me know but Version 9 is the final version.

Violet Cybernetics - Again, these products have reached their ultimate versions. Although remaining on sale, there will be no further updates.

Violet Studio Skin - These cover Verotic, LTX, Verotic Male and Demon Studio. I released the 2.1 ADV2 applier some time ago and customers should have updates these by now. Sadly though I have been looking at the Starlight skin base now for some time and I have been looking at replacing all current skins I have on sale. There is nothing more I can really do with my skins. They have Omega built in and they are the pinnacle of my skin design process, on a technical level. As such, again while only a formality, as there will be no more updates, these have reached the end of the line, even if they are still quite lovely.

LTX Mesh Items - These have always been sold exclusively in world and sadly for that reason, there will be no further updates. I believe everyone should be up to date though as really the Forza line hasn’t changed that much.

And now, the worst is left for last...

VSX...
It is fair to say, VSX is probably one of my best sellers both inworld and on the marketplace.
The VSX line reached its pinnacle with Version 6 and at that point, there really wasn’t much more I could do with it. Transferred to Mesh with materials, the products were as good as they got while staying within the realms of their original design scope.
VSXM was also a product line I pretty much nailed from the outset. Currently on Version 1.51 the last update saw materials and Omega Support added for the bulge. This all said, since 2013, the products have really required only 3 updates and they were pretty minor ones at that.
I have been muttering to myself for some time that I should bring new products out in the form of the VSXR line which has been on the work bench for some time. This situation really does hammer home the point that it is time I got on with that project. With no new updates planned for VSX or VSXM, I have decided to stop development on them, even if there was development I had planned, which there wasn't.
There is one slight bit of good news though. If you bought from the market place, I have put them on Casper, so visit the redelivery terminal in world and get what you need.
I really don’t want to say this, but... if you are still using Version 2 or 3 of VSX, and you really want the update... contact me in world and I will see what I can do.

So there you have it. I will over the next few weeks, be swapping out the defunct hippo updaters on all products and replacing them with Casper Updaters. This will be for products that are continuing their development process such as vStrings or Fusion.

I wish I had better news than this, but sadly this matter is out of my control although I hope you can see I am making every effort to ensure customers are well catered for.

Addendum...
I have now completed the migration of Marketplace Sales to Casper. If you have bought any currently available product from Violet Studios on the Marketplace that has been updateable, if you go in store to the redelivery terminal you can now get the lastest versions there.
Hemi
Posted by Violet Studios at 18:30