Following on from last nights release of the Demon Skins, today there are two major releases.

Short version:
Verotic Zen and Tiber Skins have been updated and reworked to ADV2 spec.
All six primary skins have been rebuilt, and there is a brand new 07 very dark skin for both models.

In the Nosferatu Studio, there is a double release covering both male and female ADV2. 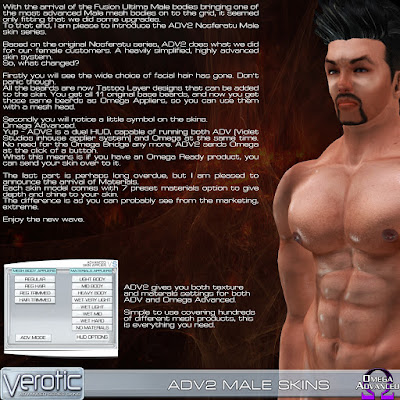 Highlights from the release are:
Single base skins replace the wide array of beard options. These are still available but now in Tattoo Layer format, plus you get Omega Appliers for Mesh heads for the beards.
ADV2 Mesh Applier HUD gives you complete control with Omega Advanced built in to the HUD.
Materials Support - brand new for this release is a choice fo 7 different materials settings for the skins.
On top of this there is the brand new 07 dark skin for both Tiber and Zen.
Skins are priced a 995L$ 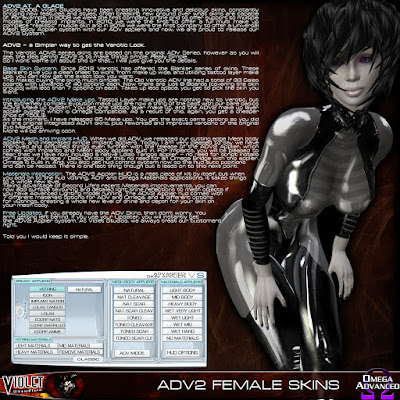 Those of your familiar with the female ADV2 appliers will know they come with a similar set up to the male but you also get breast implant appliers and vString materials appliers.
Existing customers can wear the updater to get the latest copy. 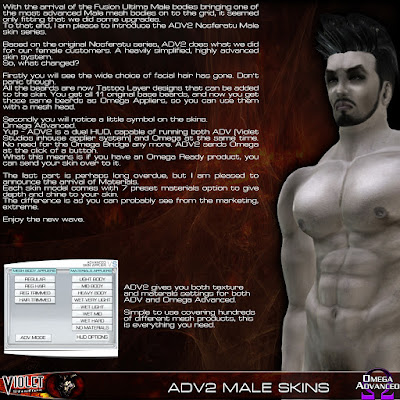 Again, with this you get a very similar set up to the Verotic Skins with materials on board and both ADV and Omega Advanced available from the HUD.

All of these are in store now! 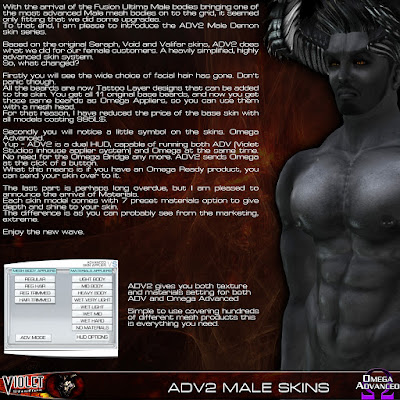 Continuing with bringing everything up to date in the stores, I am pleased to announce the release of the Male ADV2 skin series.
Based around the original skins, you will find things have changed quite a bit.

Highlights from the release are:
Single base skins replace the wide array of beard options. These are still available but now in Tattoo Layer format, plus you get Omega Appliers for Mesh heads for the beards.
ADV2 Mesh Applier HUD gives you complete control with Omega Advanced built in to the HUD.
Materials Support - brand new for this release is a choice fo 7 different materials settings for the skins.


When I built VSXM it was built on the back of years of research and development with VSX. Although fundamentally a different design idea it used the foundations of VSX and with VSX5 having being developed alongside VSXM, both products were at the time a pinnacle of my work on VSX.
That said, I still expected to be dealing with customer requests, upgrades or other items, even repair work, which is why it really came as a surprise when I looked back and realised VSXM is nearly 3 years old and in that time I have only released one minor update to it.

As many customers will have seen, I updated VSX to Version 6 recently, transferring the products over to mesh, integrating materials on to them, and introducing the Omega / ADV ready bulges and camel toes.
I am now pleased to say, VSXM has now progressed to Version 1.5.

In this update customers get both the Materials Update and the Bulge Camel Toe update, however because this is VSXM, there is something more to it.
On VSX, Materials (the technology that makes things have surface depth and shine) came as a stand alone, preinstalled item.
With VSXM, you get choices.

The new Materials HUD gives you complete control over the materials on the products. With six options for normals, and six options for specular shine over two major areas (head / shaft and Base) I have created enough options to keep everyone happy and the result is quite spectacular.

Existing customers, as per the Violet Studios Way get the update free. All you need to do is wear the updater included with your original purchase and a fresh copy will be sent over to you.

Enjoy!
Posted by Violet Studios at 18:08 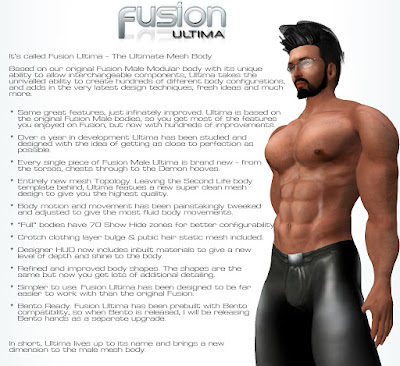 Short Version:
Fusion Ultima Male (Version 2) has now been released.
This is a complete, brand spanking new Version of the male body system built from the ground up with all new mesh, refined weight painting and hundreds of improvements all round. Just take a look at the above teaser... you get the idea.
All Fusion Male Bodies have brand new versions. The bodies include Genesis, Skinny, Athletic, Gladiator, Barbarian, Zerberus Demon, Drider and Mech Drider.
All Pick n Mix elements of the above bodies, as well as the Razel Hooves have all been update with brand new elements.

Wear your updater now if you own the body, visit in store for redelivery and in summation, enjoy!
New to Fusion? Check out the bodies in store - there are demos!

Longer Version:
Some may argue it took me long enough. However realistically Fusion Ultima has barely been out a year now and what I did with the female bodies was a huge task involving thousands of hours of design and development work.
So, when it came to looking at Fusion Ultima Male, needless to say it was the same process all over again.

As with Ultima Female, the new version 2 male bodies started life with a completely built from scratch male body. The original Fusion Male and Female bodies were based on the Second Life Avatar however when Ultima came along for the female, I decided rightly to move away from the SL mesh due to one simple fact. Its rubbish. When it comes to male bodies, as I have said previously, the SL Avatar does not have a male body, but rather a rearranged female body to look male, and as a result of that you get a lot of oddities, hence the reason why I decided to start Ultima male with a blank sheet. Outside of the hands and feet, the Ultima Male body is 100% custom built as a male body.

Thanks to a considerable number of upgrades and lessons learnt from the Ultima Female body, the new Male bodies have been seriously finessed. All the older weight painting has been ditched in favour of the Ultima weight base giving far smoother and finished body movement. The body has been tested extensively to ensure its smooth operation.
In addition to this, gone is the limited show hide zones from Fusion replaced with over 70 show hide areas. You also get the new Master Set up HUD female customers will be familiar with to control the body set up.

On the set up side, you will find Ultima Male also lives up to expectations. On the designer hud you can find (finally) materials choices to give extra surface texturing and shine to the body. The body's skin, cloth and tattoo layers are also as you would expect mapped to the Second Life body, so you can use Omega Advanced on any area. In addition, hand and feet nail options are now Omega Compatible, opening up a wide choice of nail options.

On the upgrade side, beyond what is above, the clothing layer now features a crotch bulge adding for a little extra realism around clothing and you also now get pubic hair which is optional and toggleable. In addition you get the Ultima Female neck system which offers choices over how you want to set it up. Either full neck, blended neck, or no neck.

To sum up, Fusion Ultima Male takes the idea of the male body to a whole new level offerings all the benefits you expect from Fusion Ultima in a male body. This is perhaps the most advanced body for males out there today.

Enjoy... if you missed it the first time.
Posted by Violet Studios at 18:02

I finally gave in to the requests and you will now find Ruben has now got a sister body in the form of the Ruben Pregnancy. This is a 7 stage body, coming with the usual Fusion Ultima benefits although due to the design it does lose a few too.

Enjoy!
Posted by Violet Studios at 10:02

Following on from the previous posting, I have now finished the VSX6 rework. The Herm, Hybrid Canine and both Lilith's Gift and the Female Evolver have been reworked and updated.

Because these are Adult, I have put the info and pictures on the Adult Blog.
Full details are here

As is the Violet Studios Philosophy, these updates are free. Simply wear your updater to get the latest copy.

Enjoy!
Posted by Violet Studios at 09:17

This will probably come as a surprise to many who assumed that VSX was now a forgotten product line. Actual truth is, it really was supposed to have been discontinued years ago, but... you just kept buying it!

As a result of that, I have released the Human, Feline, Canine, Futa, Demon and Equine VSX6 now models.

I cant really show you more here though, so if you want to go have a look, click here to go to the adult blog

I will be moving to part 2 next which should be out later this week!
Posted by Violet Studios at 17:12

This is something I just kept forgetting about. I had planned to release both of these years ago and someone just asked me about this, so what else could I do.

These are the Pregnancy special lower bodies. Because you get 7 lower bodies they are somewhat more expensive coming in at 1000L$ each.

If you want pictures and more details click here


I am still working on the first part of a major rerelease of a very old product line but news should be coming on that shortly.

As it is with all Fusion work, it is adult marketing, hence I will have to pass a link through.

Pictures and information are here

Demos are in store.

Hemi
Posted by Violet Studios at 11:57