It is hard to believe that I have been on SL for so long really, well over a decade and over those years life in a virtual world has been no less real than RL... in fact at times it has been a little more real.

Back in the early days, I loved the idea of how unlimited the prospects of creativity were on here and finding things to create was never a hard task. It was always made better by the friends and other creatives I had in my life. The Violet Studios build lab was always a hive of activity with everyone creating, sharing and inspiring each other.

However much as with everything in the real world, things change and I am not very good with that.

Friends move on, change careers and life as always evolves. By 2016 I have to admit I was finding myself in a creative blackout. I had done so much on here, but I was burnt out from the sheer effort and getting bogged down in ever increasingly complex projects that were reliant on other people's input and when they had moved on, it is clear that those projects started to stall.

SL was changing during that time too. With LL's focused on Sansar, Second Life was getting ignored far too much, developments on the grid were stalled and it had created a very apathetic feel to the grid, something that in combination with the more personal side of my SL, left me feeling utterly void of creative passion.

By the time 2018 arrived, I was probably at my lowest point on here and so I decided to go out in to the real world, get a job and sadly walk away from SL although not entirely. My biggest issue was "finding the fun" again, meeting new people and maybe finding some mojo. That's where I have been for the last four years.  I have been doing a real world job, although in hind sight it was not the best choice.

I have in this time done what I wanted to do though. I have had the time away from the grid and reconnect with the real world although I will say this quite frankly, it's not all its cracked up to be. When it comes to SL though I have had the time I needed to clear my head, find some fun and meet new people.  During this time I have also been pleased to see that LL's have finally decided to focus back on SL again, sold Sansar (which as I predicted in 2015 was an absolute disaster) and finally start bringing SL up to spec again. It did make me laugh that I pushed on my blogs back in 2013 the idea of using baked textures on mesh items and it took LL's 6 years to come up with the same idea with BOM. Things have changed on here and for the better.

So I would say after a rather long hiatus from the grid, I am back.

I have probably got a few hundred products that I want to create on here and while some of them fall in to the "Big Jobs" category, most of them are fairly straight forward artistic endeavours. What are they? Well, you will have to wait and see, but VS will be taking a new direction to say the least with old products being brought up to date and ranges of entirely new products hitting the shelves.

Expect a new product or two every few days from this point on and I will say I am genuinely excited at the prospect of this.

It's nice to be back and to all those who have supported Violet Studios over the years you have my thanks.

It has been a long time since I released something new and I will admit it is strange coming back after so long and settling in again...

However... every new journey starts with a single step and I am very pleased to say, that step has been taken now and you will be getting a lot of new products coming over the next month so watch the skies as Violet Studios is now back. 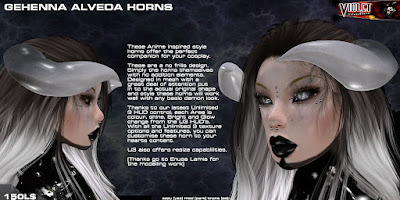 These are the first in a new line of horns. No frills here - just horns perfect for you anime style cosplays.

At 150L$ they are excellent value and come with all Unlimited 3 options on textures and materials.

Enjoy and its nice to be back!