Since the mass release of the 2016 Cyber Studio at the weekend (see post below), I have been working through the final two products in the studio bringing them in to 2016.

Firstly is the Cold Fusion Boots.
Originally designed back in 2009, I have to say these have remained pretty much unchanged since launch outside of the conversion to Unlimited 3 some years back.
Well, that changes today. 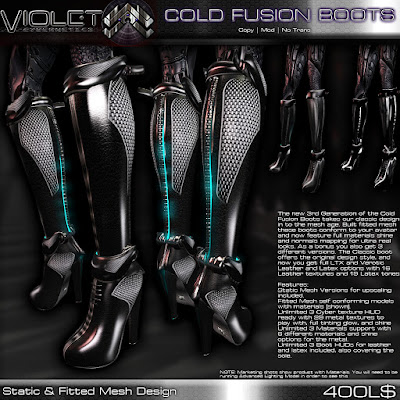 The old prim sculpt design is now a thing of the past. Although based on the original design, Version 3 Cold Fusion boots have been heavily breathed on and cleaned up now in full mesh.
In addition, where as the original boots were simple attachments, these new boots come in two flavours. As per the original, you get static mesh version which can be modded and edited to fit a variety of avatars. That said you also get Fitted Mesh versions.
It doesnt stop there. The boots now feature full materials, giving them a whole new advanced level of depth and detailing. And if that wasnt enough, you get three versions. Classic "Carbon inlay" design from the original boots. But you also get LTX and Verotic Leather  Boot packs - 15 leather textures and 19 Latex textures.
Finally there is the metal elements which are now Unlimited 3 Cyber texture pack compatible, as well as U3 Cyber Materials compatible.

The Dark Tech Cyber Suit has been around now for many years, and whole being upgraded here and there, not a great deal has changed with it. 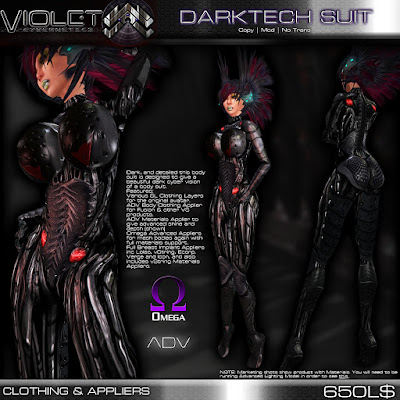 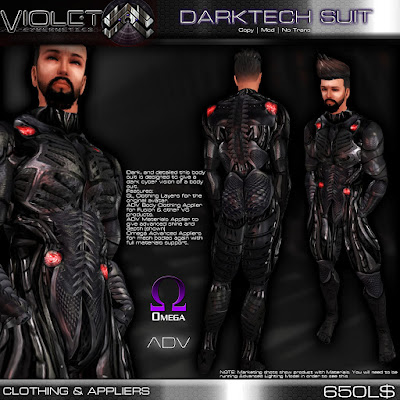 Version 2 sees it brought fully up to date though.
For male and female, you now get Full materials support for ADV and Omega. so you can get that rich detail look on your mesh body.
For female, there is also the added bonus of vString Materials support too.

I would have had these out sooner if not for the grid problems this weekend and more over last night.

In total though, that is Violet Cybernetics now brought up to 2016 standards and a completed job.

Enjoy!
Posted by Violet Studios at 12:04