I think, if you read the previous two posts, you will already have an idea of what Evolution is, and how it works.

While this doesnt cover the massive task it has been doing this update, I am pleased to say Evolution's launch completes itself with the Demon Studio skins lines.

As always, you can get updated models by wearing the breast updater box that can be found with your original sales folder.

For Moritas and Abyss, you will get the full skin Blanker model, while for Veyra and Elyssian there are tattoo layer updates.
Torya has given me a headache though. If you would like the update, drop me a notecard in world and I will arrange with you to do an update.

In the Demon Studio Right now, you will find the Original Gothica and Lust Options, Gothica Moonstar, the Cyber line TekTok and Crystal Make ups and the Eleator Gothica Make up (all of which are available in Verotic as well as human options).
I am however working on two new demon studio specific make up packs (10 total) which will be released shortly.

Here is a teaser and they are all in store now 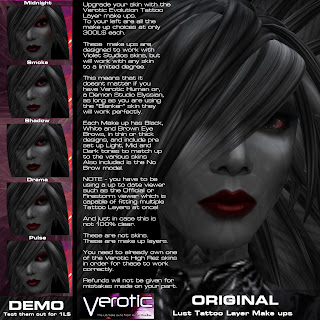 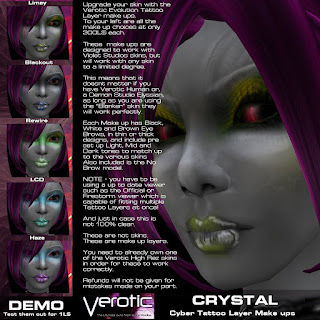