Well... what can I say about Gettai other than to show you the picture.... 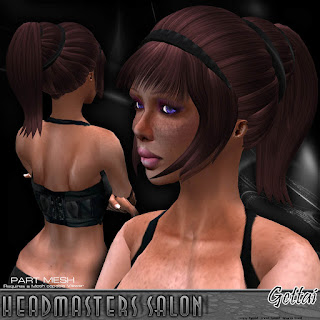 Its a part mesh hair, comes in the usual headmasters colour system, and is in store now.

Now thats out of the way, you may have read the group message however its fair to say limited space to say what the situation was so...

Those who can remember back that far, will obviously remember that Headmaster was originally the co-operative idea of Studio Worxx - an idea that was supposed to see four designers doing unique and different hair styles all under one roof.
Things however dont often go to plan, and in the end there was just two of us who eventually launched Studio Worxx - myself and Vii.
Studio Worxx did well for itself however with the original idea of the store gone by the wayside, and with the release of the so called Mark 2 texture system in store, the decision was made to make the store name more reflective of a hair studio, hence it became rebranded as the new Headmasters Store.

Now... the tricker part. Sadly for reasons outside both myself and Vii's control, the migration to Headmasters didnt go smoothly. In fact a little under 20 hairs in store were still under the Studio Worxx brand.

Over the weekend, visitors to the Headmasters store will now have seen that migration has now been done and all the original Studio Worxx (and some of the Mark 2 Headmasters hairs that didnt move to the HUD system) have now been all brought right up to the Mark 3 HUD driven texture system.

Sadly it has seen a roughly 6 hairs disappear from in store (mainly the reason was due to incompatbilities within the texture HUD system with those hairs) however it does mean a much more advanced choice of hairs are now available plus, there is actually one hair in there which is new too outside of the Gettai Hair.

So... Everything is up to date in Headmasters