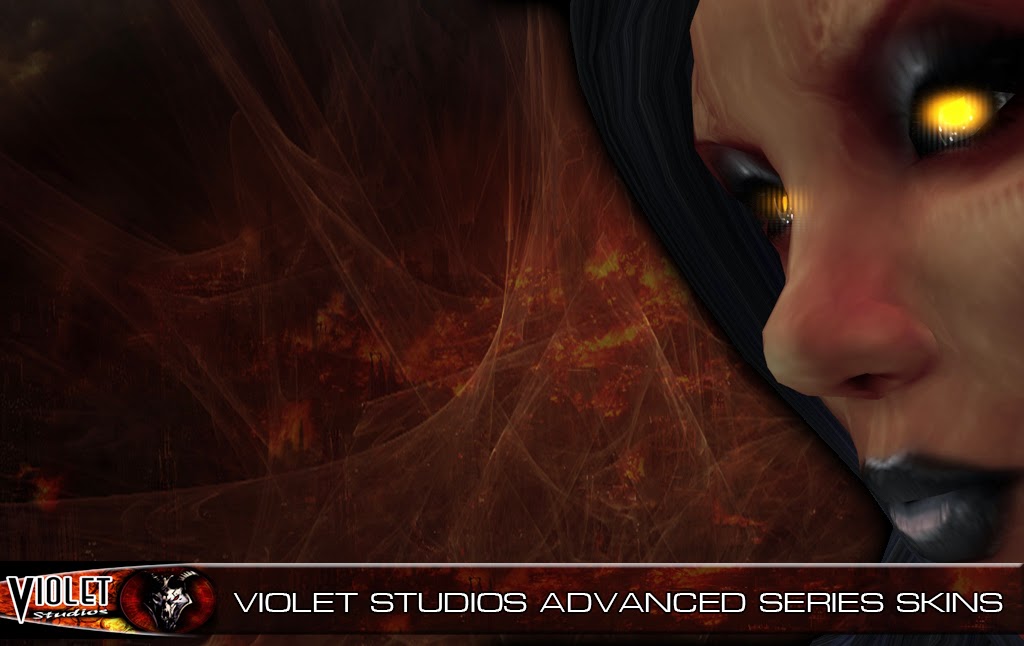 I will go in to details of this release, but first I think its best to give you the highlights.


Violet Studios Demoness ADV is everything you have come to expect from us, with the detailing and quality of our skins.

Elyssian, Veyra & Abyss all have our new 2014 Face designs.

There are now Extras model skins available which can transform your look (see below).
Finally, the long awaited  and extremely smart "Mesh Applier System" has arrived which is designed to apply the body textures to mesh items. At the moment we support Phat Azz, Sking "Butts"  and Violet Studios Polymorph products (due for launch in April May). More product support will be added over time and possibly sooner than you can imagine.

In addition - if you see below, VSXM, our Wings and our Hooves have all been updated to use the 15 new colours.

Best thing to do is take a look in store - in total there are nearly 1000 new skin products available.

I do know that customers who have bought skins in the past would like to get the update to the mesh applier system too. Sadly I cant do this as a free update however there are now full skin boards in store covering
Currently Elyssian, Veyra and Abyss are covered by the Update Centre. I have decided considering Scythe was last seen in store back in 2011, not to cover the Scythe or older Demoness skins.
They do cost 300L$ each but will give you the capability to utilise mesh products without having to update. The ADV Update Centre is located on the upper floor, just above where the Female Hooves are on the lower level.
The one bonus item though is Torya, considering it is a vastly simpler skin (although not in design), I have provided that as a free update for customer - simply wear your updater.

What more detailed info... then read on.


Since 2009, Violet Studios have been creating Innovative and delicious skins, constantly bringing new features and styles, often breaking new ground over what skins are capable of. For example, in 2009 we were the first company on the grid to offer support to multiple models of breasts implants and in 2010 we were the first to offer a full multi make up complete “realistic” demoness muscle skin.
ADV is our Advanced Series skins system. With over two years of preparation and over 8 months of assembly work, we are very proud to release this innovation in skins.

2014 Faces & Make Ups
One of the largest changes to the skins themselves is the reworking of our faces.
On the Make Up side, we have pushed the boat out. With a standard choice of 20 make ups for Elyssian and Veyra, and 15 for Abyss, you get the old familiar styles but with an all new, highly polished look.

ADV Skins
As with all previous Violet Studios Skins you get our usual selection of features skins wise taking multiple styles either as full skins over tattoo layer overlays. See the skin board for the exact contents.
You also get our full skin or Tattoo Layer “Blanker” skin system, which is designed for use with Tattoo Layer make up such as our own Evolution Make ups. These Blankers are available with or without Eyebrows, and include multiple styles of Tattoo Layer eyebrows which are also tintable on the Elyssian / Veyra Skins (not for Abyss).

ADV Extras Skins
These new skins are designed as Extras that can either be used stand alone with the addition of tattoo layer make up, or if you own a full like for like skins (prebuilt with make ups) you can use the Tattoo layer bodies to overlay those. In addition, for Elyssian and Veyra you can use these new bodies with older skins.
In addition, Extras skins do give up the ability to quickly build and deploy who new ranges of skins, so if you would like to see something specific, send us a notecard!

Breast Implants
One of our classic innovations, today our Breast Applier system is one of the most advanced on Second Life. Built as an easy to use HUD (no messy multiple applier to clutter up your inventory), we support multiple brands of implants including our own vString Line (All Models), Ecorp (Overfilled, Anime and Naturals), Icon Bra Busters, Lolas (Tango, Mirage, Natural and Push ups). Although no longer officially supported, for those legacy skins, we do still offer Implant Nation Universal Appliers, but for our newer skins, be aware, we don’t support them.
You also get multiple versions of the breast appliers covering Natural or Oiled.
In Addition, on the ADV release, we now have unique Lolas Tangos / vString Evo & Revolution appliers for each skin - so Veyra and Elyssians appliers for the chest plate designs are different!

Mesh Applier System
Bringing a whole new dimension to Violet Studios is our new Mesh applier system. With each skin you get 2 appliers – a Body applier, and a Face applier.
These extremely innovative appliers are a proactive system, rather than being a reactive system.  Rather than having hundreds of appliers for individual product lines, the Mesh Applier system just has the two appliers, and through innovate use of scripting which can be installed in to products, these applier can cover literately hundreds of products, as long as we have built a script for the said product.
At this moment, the appliers are designed to work with Violet Studios Polymorph product lines, Phat Azz, and Sking lower body “butt” mesh items (sadly not for full bodies).
More information on the Mesh applier can be found on the Mesh boards, however if you have a product that you would love to be able to use with your Violet Studios Skin, as long as it is Mod and is set up in a predictable way, we can take a look at it, and deploy a script update which you can then install in the product and it is then ADV compatible. Contact Hemi Violet if you have an item you want to have made ADV compatible.
Posted by Violet Studios at 16:21