Quick update here. This has been a really bizarre and bad year for everyone I think and sadly I am not much different in that respect. Looking forward to saying goodbye to 2020, however it is about time I started working on things again.

vStrings have long been overdue for some update work and the first out of the blocks is the Revolutions. Bringing these up to date with the latest Baked on Mesh design work, they are available to update right now.

Just head in store, go to the Casper Vend Redelivery terminal and update yours now.

Well if you are getting back to work, why not get your teeth in to something quite substancial?

What is available - Everything in those lines

What is this update? Well, that is a more interesting question...

Back in 2013, when mesh was just coming on the grid a small little company on SL had a really good idea. Yes, it was me and I suggested the idea to the powers that be that they use the Second Life Baked texture system to put Standard avatar textures on to mesh bodies.
We got the usual response though... utter silence.

At the end of last year though, guess what... they had a really good idea about putting baked textures on to mesh bodies...

I am really trying not to roll my eyes.

Anyhow, nice to see this system is finally being put to good use...

Now, All of the Fusion Ultima line - Pick n Mix, Bodies, Lower legs for furry and demon, etc have all been updated to Baked On Mesh.
Gym Bodies have also been converted as has Tudoto.

Grab the latest copies from the Casper Redelivery server in Fusion store. Details of the BOM update are in the boxes including instructions.

What is BOM though?
BOM is effective Baked Textures. A long time ago when mesh was a pipe dream and the height of SL design was sculpted prims, creators had to rely on the stock Second Life Avatar. Even today we still use the textures that were on that avatar - You find these in ADV or Omega Appliers.
That said, the Second Life avatar had an advantage over our versions. You could put multiple layers on - Skin, tattoo, jacket, pants, underwear etc etc etc. To stop massive texture load though from wearing so much, LL's created a way to combine all these textures in to one texture for the upper, lower or head. This is called Baking Textures.
When mesh came along, the Second Life Avatar became all but defunct as people turned to mesh bodies and creators had to work on the basis of making appliers for said bodies.
What baked on mesh does though is automatically transfers the baked textures LL's creates and put them on a mesh body. Simple really.

So, what is the basics of my version of BOM?

Firstly, Alpha Masking is set to off - don't use or wear an alpha mask of any kind. If you need to hide something you will have to use the Master Set up HUD. I did this because BOM sets the texture to Alpha - and this messes up the body with hair and other items that use alpha textures. It looks messy.

Secondly you can still use the Fusion clothing and tattoo layers if you want to.

Thirdly, if you just intend to use skin and tattoo, you can still use Omega Advanced or ADV appliers to add materials to the skin layer although trying to add skin textures will not work. In effect you can use an old skin with advanced materials from any skin creator.

There are quite a few other details to this including a new daily hud and updates scripting specs. All the details are included with BOM update.

I will tomorrow be finalising the design work on vStrings and Fusion Male, releasing those in to the wilds too.

In short though, Violet Studios is back... enjoy!

First off, a way of an explanation over what has been going on. The truth is since about 2015, and although I didn't want to admit this to myself, I was becoming creatively burnt out. This all started coming to a head in 2018. I was stuck in a rut, unable and unmotivated as I tried to go in circles with projects and ultimately getting nothing done.

To that end, I had no choice but to walk away, a clean break to do something entirely different. I couldn't stay on here as all that would have happened would have been that I would not have been able to break free or recharge my creative batteries.

Hence I pretty much disappeared from the grid. I am sorry about that but sometimes in life you need to do these things and I really needed to do that.

It is now 18 months on from that decision and it is now 2020 and I finally feel that I have broken free of that vicious circle. I have new ideas, new directions I want to take and yes, I will be doing some updating too, but I also needed to do some remedial work.

Over the next week, you will see things starting to change around the sims.

Those changes are already underway. Back in 2015 I decided to create the Caldera Project. In hindsight that was not so much of a good idea even if it seemed like that at the time.  Those who have been around Violet Studios since we opened will know the Demon Sanctuary Castle was always a prominent feature of the sim although when Caldera opened, I moved it.

Well, the Sanctuary is now back in pride of place where it always was. I have also moved the World's End Pub down to ground level although it will need some extra work before it reopens. The long and short is that Caldera is now officially gone as I bring everything back to where it should be.

Now... I could tell you what is coming next, but to be honest I don't know. The next 2 to 3 weeks will be spent trying to bring everything up to date. After that new projects will be here.

I guess what I am trying to say is this.

Hemi
Posted by Violet Studios at 17:38

Letting customers know after some investigation work and head scratching we found these breasts had an issue.
The nature of this bug was the breasts clothing layer / tops were doing strange things inlduing turning grey. The bug has now been tracked down and repaired.
To that end, the X_X, XL, XXL and X-Loons have now been updated to version 5.01

Head in store to the Redelivery Terminal to get your free update.
If you have any issues contact me in world. 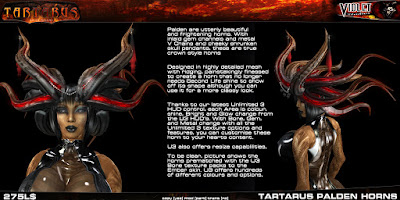 Palden are stunning crown style horns that arc off the skull in beautiful detail.
Featuring inlaid Gem channels, the horns have upper flex tassles and a frontal V chain with cheeky shrunken skulls.

These come with all the benefits of Unlimited 3 including materials support
They are 275L$ and in store now!

Hemi
Posted by Violet Studios at 21:00

I have just release the Thighz Body - this is a more extreme version of the Hipz body with extremely wide... well, thighs.

As this is the PG Blog I can't show you it, but if you click this link you can take a look on the Adult Blog.

The body is 1500L$ and there is also the Pick N Mix Torso version which is 500L$ for people who already own Fusion!

Enjoy!
Posted by Violet Studios at 23:12

The SuperCurves, SuperBimbo and SuperThick Torsos have been promoted to full ready to use Fusion Bodies having previously only been available in Pick N Mix

They are in store now.
More details are on the Adult Blog here
Posted by Violet Studios at 22:43 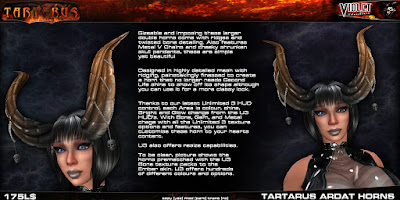 I thought I would go a little simpler with these. Offering a beautiful twisted style horn with subtle ridges, I have included light metal V Chains enbelishments and some cheeky shrunken skull pendants. 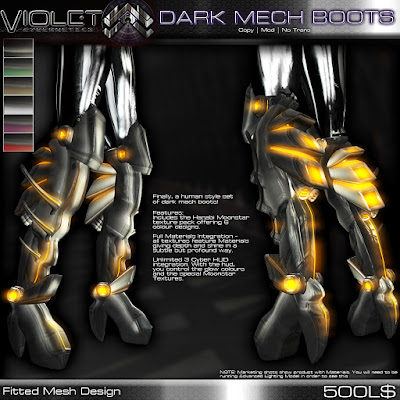 These have been a long time coming and finally I have released the Dark Mech Boots.
These heavy style cyber boots are hard all the way crossing over with the Hanabi 2.0 mooncat system. With 6 base colours, tinting and glow control, you can set these up how you want
They are fully fitted mesh and will adapt to your avatar out of the box.

They are in the Cyber Studio right now priced at 500L$

Enjoy
Posted by Violet Studios at 23:32 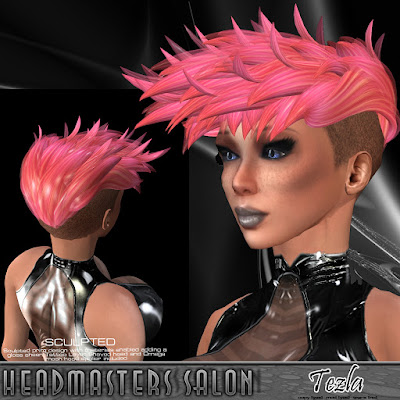 I have had a few people asking me about the hair I have been wearing in recent photoshoots for the demon studio and it is something I never released... as demand is there though... this is Tezla.

This punk hair comes in all 72 base colours, for the headmasters range (see in store), it is sculpted, however it does have materials shine on it to add some depth and gloss..
You also get a shave head tattoo layer to go with it in black, plus you get the same as an Omega Advanced tattoo layer for mesh heads!